Two systems you can use to increase productivity and reduce stress in the increasingly complex world of construction.

People who join the construction industry from other industries are often bewildered by our absence of systems and tools to effectively control detailed production and operations. Our history has seen us evolve with little regard to such matters. The significance of this gap is highlighted by the fact that our ever-challenging projects are more likely to take longer and cost more than estimated.

The Project Management Institute has a “significant gap in the current framework [with] the lack of consideration for how and where work will be performed.” (Project Production Institute, n.d.).  There is a need for systems and tools to effectively manage production at the ‘shop floor’ day to day level. LPS and GTD are two emerging systems that can be leveraged to drive efficiencies in daily construction activities, improve our industry culture and provide long-term sustainable change to our industry.

The Last Planner System (LPS) is a collaborative planning process that involves those responsible for executing the work (eg. trade supervisors) in planning the production in increasing detail as the time to execute the work gets closer. The system enables more reliable and predictable production in projects. As the industry is starting to adopt LPS, feedback has been overwhelmingly positive, even in the early stages of teams learning to implement the system.

biggest role in implementation) are not only supporting the tool but start demanding it to drive more constructive behaviours on our worksites. The routines of the system provide far greater collective understanding of the plan and dependencies on one and other. LPS drives a proactive approach to problem solving as challenges surface earlier and can be solved in advance.

By engaging, empowering, and trusting the Last Planners, teams achieve better outcomes with significantly less variances. But perhaps most striking is the reduction in the stress levels across the team. Worksites can be stressful places! But when the unexpected occurs (and hold ups still do occur) the team can rely on the system, their regular routines, and behaviours to collectively replan and commit to a positive way forward.

If only there was a similar system that individuals could use to manage what often seems an ever-growing pile of personal commitments in an increasingly complex world. Commitments to your team, customers, manager, family, friends and to yourself. If only there was an LPS for you!

Getting Things Done (GTD) - A production system for you

Amongst the mirid of great personal management resources, David Allen’s top selling book Getting Thing Done® (GTD) provides a comprehensive system for personal organisation that allows you to be more productive.

Many of us (if not all) suffer the anxiety of not achieving as much as we believe we need to be and the guilt of letting people down. Those who dive headfirst into the “art of stress free productivity” by applying the GTD system, soon feel a weight lifted from their shoulders. While little may have changed at this point, it becomes apparent to the follower that they have started a journey that will allow for far greater management of all their ‘stuff’ that life throws your way 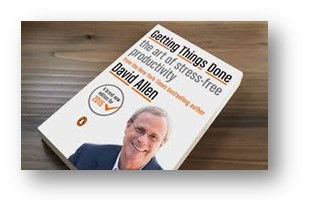 The GTD system provides greater visibility and greater control of how you spend your time. Most significantly, the GTD system makes explicit the principles at work in what most of us usually do implicitly. This increased awareness allows you to then leverage those principles consciously and use the system to channel more focus and organise your efforts to work more productively with less worry.

It is important to note how we define productivity. Typically, we refer to it as:  Productivity = Output ÷ Input
However, on a personal level you may view increased productivity as achieving more of what you want and spending less time engaged in things you don’t want (or things that don’t add much value to you).

As pointed out in Cal Newport’s critical article in the New Yorker, “the shortcomings of personal-productivity systems like GTD become clear. [The system doesn’t] directly address the fundamental problem: the insidiously haphazard way that work unfolds at the organizational level. [The system] only help[s] individuals cope with its effects”. While the statement dismisses a few key messages in the GTD book, it is evident that the system is designed for the individual. This is where LPS can provide relief.

Many stories from across the construction industry speak of the relief of our key leaders when implementing LPS for similar reasons mentioned for GTD above. Especially the Superintendents, who’s role is to coordinate, communicate and lead the execution of the construction activities. A role that has traditionally been heavily dependent on deep tacit knowledge and high levels of influence. Too often approached in a coercive manner of command and control that has often led the adversarial relationships and some of the negative cultural aspects that the industry has long been renowned for. And with this, comes a burden from both sides: from the workforce; and, from management. The key changes our industry has seen when LPS is effectively implemented include:

Acknowledging the Last Planner as the “expert”, the system ensures that a great deal of what would typically be implicitly assumed (and the source of many unknowns and stress) is made explicit, with each commitment including:

Everyone knows what the plan is in detail and the Last Planners own it. The level of trust between partners increases and better plan reliability leads to greater certainty in finishing on time with less delays along the way.

GTD requires the individual to address everything with an initial triage. The user immediately completes items that can be done within 2 minutes, defers what should be done but will take longer, and deletes or files stuff that does not need action. Whereas LPS is driven by the project’s ‘Master Schedule’, capturing what needs to be done when, at a high level. People then progressively plan how the work will be executed at the appropriate context and time.

The levels of the LPS, that are based on project time horizons, somewhat echo GTD’s 6 horizons for reviewing the work of an individual, as shown below:

At the top level of LPS we look at the project as a whole defining milestones and key activities. As horizons get shorter, the ‘Last Planners’ detail the plan to the point where they can reliably commit to each coming week, knowing what they require from others, and what others require of them (referred to as hand-offs in LPS). With GTD, individuals define “projects” as “any desired result that can be accomplished within a year that requires more than one action step”. It does not accommodate for long-term sequencing and dependencies, but Allen insists that “all the principles are as applicable to an enterprise as they are an individual” noting the need of project management for managing projects.

The LPS and GTD systems prove valuable in any project management environment. However, the emergence of these methodologies in the construction industry is evidently reducing the gap in production and operation inefficiencies and paving the way for cultural reform and long-term sustainable productivity. The realised value using both systems is dependent on the level of mastery and workforce behaviour.

Across industry we continue to build our LPS capabilities and improve how we implement it. Individually, finessing of the GTD system is a long-term challenge that takes years and for many is a life-long pursuit. With both systems we suffer regression, falling back to old behaviours, often when we should be relying on the systems the most. But both systems deserve investment as better implementation will always provide better outcomes.

The use of GTD for personal production will help anyone undertaking knowledge-based work. Likewise, the impacts of using LPS for teams where collaborative production control is needed is remarkable. Further, the two systems work great together as the commitments made in LPS represent a ‘bucket’ of ‘stuff’ for those using the GTD system. Together they provide a robust system to improve both your team’s and your personal productivity while letting you sleep easier at night.

Phil is an authentic transformation leader with a focus on team collaboration, continual improvement and innovation. Phil is currently Innovation & Continuous Improvement Manager for McConnell Dowell. Phil is a council member of LCANZ's Victorian chapter and a member of the national board.

The need for Lean is clear

Studies have shown that almost half of all projects using lean construction tools and processes are completed under budget with 64% of projects reporting improved profitability and potential cost savings of up to 30%.